Choate Machine and Tool is now distributing a revolutionary shooting support. It was developed by a renowned sniper instructor, Major John Plaster, and promised to dramatically improve rifle and handgun accuracy in all offhand shooting positions.

This new device dubbed, The Rifle Stabilizer, clips over the shooter’s belt. It can be carried conveniently out of the way when walking; yet, folded up in an instant to provided a stable shooting platform. In test by a Palma Team Rifleman it was reported, ???I found the Rifle Stabilizer to cut my off-hand groups in half. It is truly awesome!” In another test, firing a .223 rifle, Plaster was able to hit a bowling ball size target offhand at 500 yards.

The stabilizer equally improves sitting and kneeling shooting and can be used with any rifle, pistol, shotgun, binoculars, spotting scope, or cameras. Fred Choate said, ???I couldn’t believe how steady I could hold my handgun and how accurately I could shoot.” The stabilizer comes with interchangeable tips to

Unlike various bipods and shooting supports, the Rifle Stabilizer adds no weight or length or bulk to the firearm, and dramatically steadies even the heaviest rifles. Intended primarily for hunters, it hangs free at the shooter???s side when not in use, then can be raised instantly for accurate, supported shooting.

???We are confident in this product,” said Choate. ???In fact, we’ll refund its price to anyone whose offhand groups aren’t cut in half, but I don’t think shooters will want to part with it after using it.” 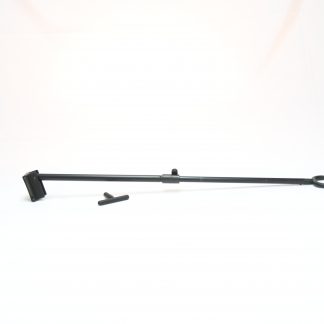 *** IMPORTANT REMINDER *** - During checkout, select the shipping option that you prefer. Refunds on shipping will not be honored after order processing. Dismiss